Hiya! My name is Nadia

Hiya! My name is Nadia- the new summer intern this year at HKDCS! I’ve now joined the team for two weeks now and I’m so ecstatic that what I’ve seen out in the field has already surpassed my expectations! I feel so honoured to be able to learn from a team that cares so passionately about these amazing animals in Hong Kong this summer so first of all, a shout out to Taison and the amazing people at HKDCS for giving me this one in a lifetime opportunity! Thank you all so so much!

A bit about myself- I’ve just finished my first year at the University of Kent studying Wildlife Conservation. The decision to apply for this course was spurred by a fascination I’ve had for marine animals; a fascination for a long time satiated by visits to the dolphinarium and aquarium in Ocean Park. It was the documentary Blackfish that sounded the knell to the realisation of the horrors of captivity, which now thinking back were quite blatant: a dolphin continuously circling its small tank, quite the contrast to a borderless sea. I guess this long time indifference just shows how normalised the practise of captivity actually is.

Having said that, my heart fluttered with excitement when I was notified by Taison that the first three days of my internship at HKDCS would be boat surveys! That meant that I would finally get to observe chinese white dolphins in the wild! (Completely dismissed the finless porpoise as given their elusiveness; the thought of seeing them so early on in my internship did not cross my mind). My internship experience officially began when I was briefed on the survey protocol of the West Lantau area on day one. Unbeknownst to myself, the western region of Lantau is actually the most frequented habitat of chinese white dolphins in Hong Kong! We ended up encountering sighting after sighting, each its own amazing spectacle that had made me temporarily forget the myriad of threats these animals are facing every single day. Whilst being utterly transfixed by a group of dolphins, one just has to widen their vision a little bit and they’ll notice these threats in the surrounding waters: high speed ferry boats coming from all directions, white styrofoam boxes left behind by small fishing boats, the walla-walla boats heading out from Tai O, the Hong Kong-Zhuhai- Macau Bridge erect only a few kilometers away… It’s rough out there for the 47 remaining individuals frequenting Hong Kong’s waters 🙁

Even though I’m strictly speaking not appointed as a “research” intern, I was able to try my hand at the line transect surveys in the back on the second week. On a typical boat survey, two surveyors sit on the deck, thirty-minutes at a time, one filling in the research survey form, the other holding a pair of binoculars, searching for a pinkish dorsal fin, or an unusual splash. I’m still in awe of the ability of the team in spotting dolphins or porpoises a distance away and even estimating the angle and distance from which the group is positioned with their bare eyes! Their professionalism has greatly increased my appreciation for the work and tenacity of conservation biologists in the field and I’m eager to improve the accuracy of my sightings and data recording skills!

The enthusiasm and love for conservation in general the HKDCS team have is so palpable. Discussion topics at the office and on the boat are not exclusive to cetaceans around the world but other animals as well. I (not exactly an avid bird enthusiast) was quite bemused whenever Anson, Taison, June and Rachel would excitedly dash for the binoculars and camera for a closer look at whatever bird our boat passed by. I am beyond grateful to be learning from this infectious and compassionate team this summer, and have already learnt about the physical conditions standing against the survival of Hong Kong cetaceans, as well as the procedure of a line transect survey from them. Who knows, I might even become a converted bird watcher after this internship!

As for now, I will be learning and savouring all that I can! Until next time 🙂 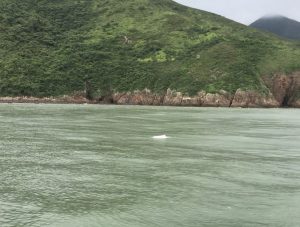 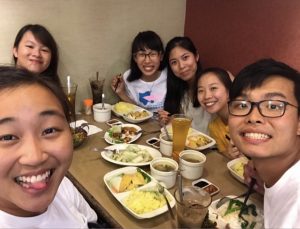 Lunch with some of the lovely people on the team: Heyman, Charlotte, June, Rachel and Anson!

← I stayed in office as usual for these 2 weeks and went on a boat trip on 19 July
Hello again dolphin lovers! →