Hello again dolphin lovers! I’m Nadia and this is my second blog post as a summer intern this year! This interim blog is a little late, meaning that I only have a few weeks left at HKDCS (where did the time go?). So far, I’d say the amount of time I’ve spent on the boat and at the office has been pretty even. As an intern, I haven’t garnered enough experience to be on- effort on boat surveys yet. That’s why on research vessel 36826 you’ll usually see me hanging about behind the on-effort researchers, observing with binoculars and practising filling in the research data and sighting sheets on my own. Jotting down data has really given me a taste of what being a researcher is like, as well as insight into the identification of dolphin behaviour and characteristics! When a dolphin sighting is made, researchers need to quickly work out the sighting angle (both from the bow of the boat and dolphin), geographical position (in coordinates, using GPS), sighting distance, beaufort, the size, approximate ages and behaviour of the group of dolphins. Some of these behaviours are spy hopping, porpoising, socialising and breaching, to name a few. Let me tell you, despite having quite a few boat trips up my sleeve now, trying to fill out all this information while fighting the urge to marvel at fellow chinese white dolphin / finless porpoise friends at the same instant is quite the challenge, one that I still haven’t quite mastered.

The most challenging sighting to record so far just so happens to be my favourite one. That day, the boat was particularly crowded, along with the full HKDCS team, we had visitors join us, including the very talented, Daphne, who made the documentary, Breathing Room (HKDCS hosts screenings of it from time to time, definitely worth a watch), two wildlife documentary filmmakers from Beijing, former intern and staff member, Robin and his brother. The survey location was West Lantau (one of the most frequented areas by CWD), so we were definitely expecting to see some CWD friends but I certainly didn’t expect to see over 15 dolphins in one single sighting, including FIVE mother and calf pairs! It was as though we crashed a dolphin party! I remember seeing dolphin after dolphin slowly surface. For a while, many of them “chilled” near the surface, meaning we could see their pink hue just beneath the surface of the water. This, I’ve learnt is perfect for photo-taking since it allows us to anticipate when the dolphin breaks through the surface to takes a breath of air. I also saw feeding in action for the first time, the tell-tale sign being fish caught between a dolphin’s jaws and an adorable mud-smeared face (they search for food near the muddy seafloor). What’s more, I caught sight of a grey juvenile swimming underneath the boat. Luckily the boat was stationary but the sight still aroused in me feelings of anxiousness, knowing that a vulnerable, precious calf was in such close proximity with a vessel that could so easily inflict on it horrific injuries. To conclude the fruitful survey, we even did (or tried to do) a short session of fitness exercises on the deck to compensate for a day’s activity-loss while being boat-bound (kudos to Robin for being our fitness instructor and tolerating our antics). My phone’s photo storage space suffered a serious blow that day but wow, that boat survey will forever be one of my most cherished memories this summer. 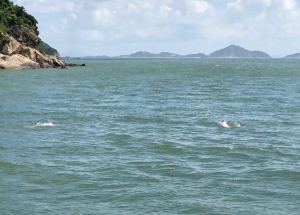 Look closely and you’ll spot the very sweet mother and calf pair, and another adult close by.

Seeing five mother and calf pairs was very encouraging and I became quite hopeful and optimistic about the restoration of the CWD population in Hong Kong. Unfortunately, this optimism didn’t last long. It was a week later that the new statistic of CWD abundance in Hong Kong was published in the media- 32 individuals left, a staggering 80% drop from 2003 numbers. It is so frustrating to see the government do nothing while CWD numbers plummet year after year. The government seems to be churning out major development works one after the other, in recent years, the Hong Kong-Zhuhai-Macau Bridge, then the HKIA Third Runway and current proposal of the Lantau Tomorrow Vision project, all while intending to implement conservation measures after development completion! How do you rewind the clock once irreversible damage has already been done? :(

I must admit, seeing the living conditions of our CWD neighbours while interning at HKDCS has brought quite a few pessimistic moments. However, helping out at the educational campaigns and seeing the fascination HK youngsters have for CWD always reignites in me a tiny glimmer of hope, as corny as it sounds. I’ve included a picture below of a DIY ocean glass keychain educational event, in which a number of children eagerly participated in! Educating the next generation is a key part of conservation and I truly believe that the carefully thought-out HKDCS educational events have the power to set ablaze in young participants a love for cetaceans and a heart for conservation.

That’s it for now, see you in my final blog! 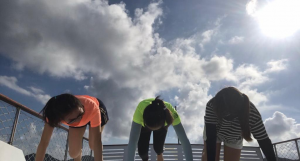 Exercise shenanigans with Rachel and June! 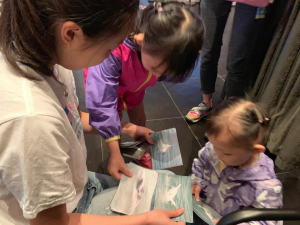 An adorable pair of sisters at the DIY ocean glass event. As you can tell, they were mesmerised by the dolphin postcards!

← Hiya! My name is Nadia
Hi guys, I am Rainbow Leung →